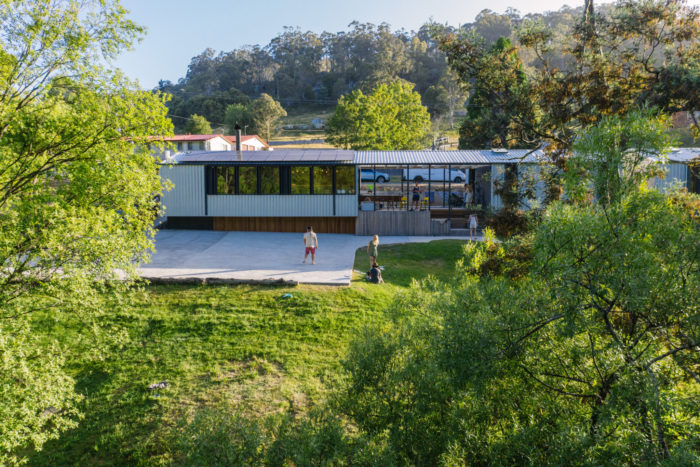 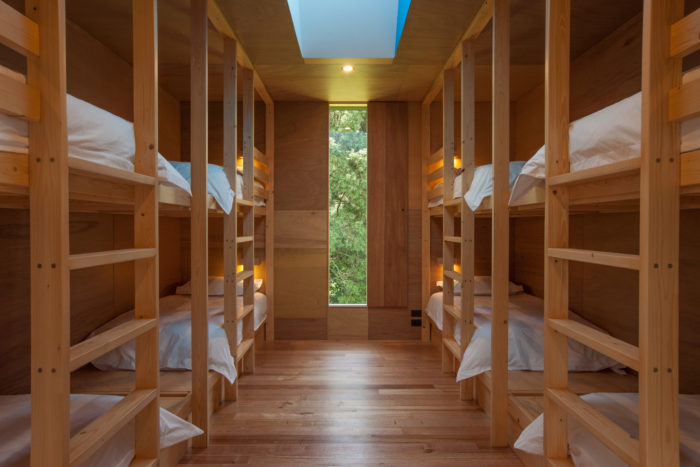 As this new and delightfully unassuming accommodation was going up on the side of the road leading into the tiny former tin-mining hamlet of Derby, in north-eastern Tasmania, someone commented to its designer Philip M. Dingemanse that it looked like a tractor shed.

The comparison thrilled the Launceston architect because within what he calls “the village character” of a once-declining town – which in the past five years has exploded into world prominence because of its fantastically scenic and challenging network of mountain biking trails – that’s pretty much what he was going for.

Dales of Derby, which perches above the Ringarooma River on the sub-alpine Blue Tier plateau, is a 24-berth, self-contained guest house that was developed by Philip M’s nephew Martin Dingemanse and his wife, Margaret.

Both have childhood histories of family riverside camping holidays when, says Martin, “all there was in a quiet, quirky township was a general store and a few falling-apart miner’s cottages.

But then, in 2015 some 30 kilometres of bike trails were developed. Within two years, and boosted by inclusion on the Enduro World Series mountain-biking tour, the town was suddenly a must-ride destination.

Trails with names like “Devilwolf, Dambusters, Flickety Sticks and Detonate” have expanded the “Blue Derby” network to 80 kilometres and along with other state venues also opening trails, the tracks now winding their way through glorious wildernesses are seeing Tasmania experiencing a mountain-biking tourist boom.

“More accommodation is being built in Derby as we speak”, says Martin Dingemanse. “But it’s nothing like ours.”

The charming anomaly of a low-key, low-rise, metal and timber clad, gable-form amenity is expressly what the owners and architect wanted to create. It is a building resonant with fond associations for anyone who experienced club ski lodge, scout or school camp facilities in their youth.

Dales of Derby, with its two bunk rooms that each sleep eight, and four discrete cabins strung along the ridge, and the shared bathing, cooking, dining and lounging areas, is the built definition of unpretentious. That’s bang-on the brief given to Philip Dingemanse.

“We wanted a scout-camp feel”, says Martin. “A place for 20 blokes, or four to five families with little kids. A place that families and friends would recommend that would also have (cabin) opportunities for grandma to stay.”

Since it opened in March last year, Dales has been working beyond expectation, being booked out throughout the summer, and picking up several awards including the 2019 Tasmanian AIA award for sustainability for its environmentally-conservative operation.

With electrician-engineer Martin having his own Launceston renewable energy business, MODE Electrical, the premises is kitted up with a 12-kilowatt solar-energy system, 1200 litres of hot water stored under the floor, “that can potentially cope with 60 showers a day”, and an all-electric operation.

But as passionate as they are about self-sufficiency, Margaret Dingemanse says the “dream was to build a place where people could come together and enjoy the space and each other”.

In the structure, the architect has built-in “all these different ways of being together – even in the ply-lined bunk rooms”.

In the scale of small rural town buildings, a point emphasised by the gaps between the cabins, the arrangement allows glimpses through to river and forest “and breaks up the form”.

Philip Dingemanse explains that Dales is designed to be “comfortable accommodation but not exclusive”. With Tasmania developing some very upmarket hotels and super-select retreats, “this is a bit of a pushback”, he says. “An alternative offering where you can have 24 people who can all have a good time with their kids”.

The facades facing the roadside are all metal-clad while in the gaps, and inside, timber is featured for its warmth and tactility. Locally sourced Tasmanian oak is refined for flooring and cabinet reveals but kept rough-sawn and randomly applied in the exterior gaps where it will grey down.

For practical night lighting, and to emphasise the implicit glow of timber, the gable shapes are demarked with light strips, and all but one of the seven parts of the building aligns with the road.

The bike shed turns “to engage with the road” and leads onto the big covered deck where the garish hues of mountain biking clothing inoculate the place with a spectrum of colour.

Dales of Derby is all about being down-home practical, communally welcoming and, Dingemanse suggests, “having something to do with naive memory.

“It demonstrates itself as a place with the potential for what it’s designed to do. It’s been established as a platform for fun to be had.”